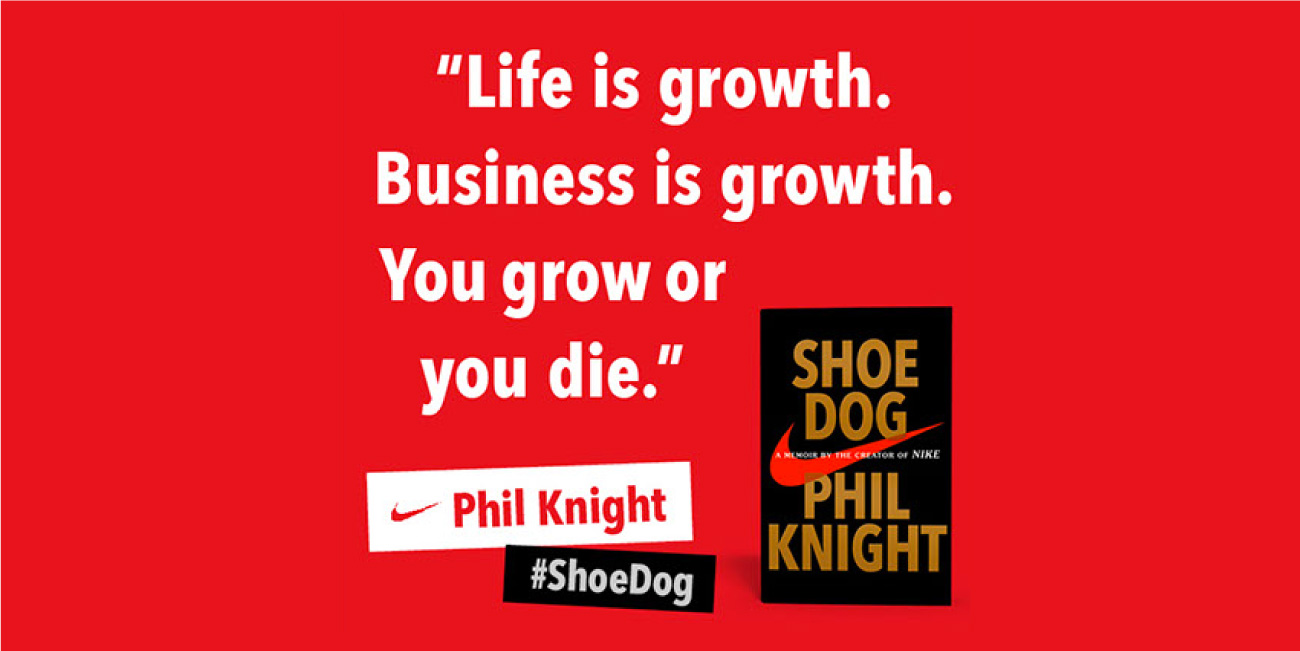 Posted at 03:47h in Uncategorized by admin

I love this quote as I am always trying to think of ideas for my Blog.

“I’m never not working on material. Every second of my existence I’m thinking, can I do something with that?” —Jerry Seinfeld

This is the first time this has happened. I started a Blog with an idea to talk about a few ‘ideas’ and link these ‘ideas’ to Phil Knights autobiography, “Shoe Dog”. BUT, I was battling to bring it all together, so instead of giving up I will do my Blog on lessons I have learnt from this amazing book and share some insights from others. Phil Knight is the founder of Nike. I must say that it was one of the best autobiographies that I have ever read. To me, it was like reading a suspense thriller that you could not put down.

Sometimes Our “Crazy Ideas” Are the Best Ones  [1]

At the beginning of the book, Knight refers to his shoe company idea as his “crazy idea”.

But for him, it was the only idea worth pursuing. He didn’t want to follow the trend and work for somebody else. He wanted to build his own thing.

Prepare Yourself for the Journey  [3]

As Phil Knight discovered again and again, entrepreneurship is far from an easy path. It’s a journey of ups and downs, and there is almost never 100% certainty. What’s more, you’re responsible for your own success.

Your business is always on your mind, and you’ll always feel like there’s more you can do.

Plus, there are the big risks involved, like running out of money, legal trouble, etc. (which Phil Knight ran into a few times thanks to some of his dishonest competitors).

You have to love this journey. You just have to love being in the middle of the cyclone, to face what seems unsolvable, every single day.

“Shoe Dog, …… is a refreshingly honest reminder of what the path to business success really looks like. It’s a messy, perilous, and chaotic journey riddled with mistakes, endless struggles, and sacrifice. In fact, the only thing that seems inevitable in page after page of Knight’s story is that his company will end in failure.” – Bill Gates  [4]

In a recent Podcast I listened to, they were talking about Passion and it was interesting to read that the meaning/ root of the word is to suffer (Passion- root is suffering – “The word passion comes from Latin root pati-, meaning suffering, or enduring. Thus, compassion means to suffer-with: the compassionate aren’t immune to other people’s pain. And passion is, at its core, a form of pain that demands it be quenched.) Phil and his team were so passionate about the journey and the brand that I suppose, they knew that there would be a level of suffering along the way.

Culture is More Important Than Talent  [5]

Knight mentioned a few times how he kept hiring accountants and those who were good with numbers. But every person he hired had a love for the business of making shoes. Every one of them had a passion for athletics, even if they weren’t athletes themselves. They pushed harder when most people would quit. They uprooted their lives for the sake of the company.

In most cases, Knight let his team do their thing without trying to tell them how they should do it. I think that in and of itself is one of the characteristics that define a true entrepreneur. (I think that means he never micro-managed)

“What I identified most with from his story were the odd mix of employees Knight pulled together to help him start his company. Among them, a former track star paralysed after a boating accident, an overweight accountant, and a salesman who obsessively wrote letters to Knight (to which Knight never responded).” – Bill Gates

If you hire people for their values, you can teach them what to do. It’s the “how” that our values often dictate.

Culture is one of the biggest keys to Nike’s success.

As an entrepreneur, it’s your responsibility to build a winning culture within your company. This goes back to hiring people with the right values, as well as your style of management.

“Firstly: cash is all that matters. Cash buys time, no cash buys death.” – Adir Shiffman  [7], Adir Shiffman is executive chairman of Catapult Sports and a serial investor and entrepreneur.

The unfortunate flip side to Nike’s obsession with growth is that before its IPO, the company nearly always appeared broke because it was investing every spare dollar back into the business. With a cash pile that was never enough to cover its bills, the company grew dependent on ever more creative and desperate ways of paying for its large inventory orders:

“… we weren’t broke, we just had no money. Lots of assets, no cash….. I was forever pushing my conservative bankers to the brink, forcing them into a game of chicken. I’d order a number of shoes that seemed to them to be absurd, a number we’d need to stretch to pay for, and I’d always just barely pay for them, in the nick of time, and then just barely pay our other monthly bills, at the last minute, always doing just enough, and no more, to prevent the bankers from booting us. And then, at the end of the month, I’d empty our accounts to pay Nissho and start from zero again..” – Phil Knight

For years on end, Nike played this circular game, the business equivalent of living pay check to pay check. But somehow, the company managed to just barely avert disaster many times over. Fortunately for Knight and company, Nike would finally go public just a few years later.

One of Knight’s most important lessons came when he learned that his sole shoe supplier, Onitsuka (ASIC), was going behind his back to cut him off and work with other US distributors. Knight was the original distributor of ASIC’s in the USA. As soon as he found out, he started working on a plan B: to produce his own line of shoes.

Knight’s partners and staff were always thinking of new ideas that helped athletes. Before the NIKE brand was started, he was giving these ideas to Onitsuka. When he decided to start his own brand, they already had ideas on how to make a better shoe.

“The way to stay ahead was through product innovation. We happened to be great at it.” – Phil Knight

His story is a lesson in Commitment

In a brilliant Podcast  [9] featuring former Nike employee and Strava Board member, Sarah Robb O’Hagan  [10],  she talks about her time at Nike and how much she loved Phil’s book and said that everyone should read the book. His story is a lesson in Commitment, not with the only idea with exit strategy.

“Nike is a world class leader at disrupting themselves, constantly on-boarding new people, with an unbelievable culture. Take away” – Sarah Robb O’Hagan

To be a great sustaining company, you have new thinking but never lose sight or roots and heritage. The brand is anchored by heritage story and culture. She says that what has kept Nike brand from not stagnating is innovation and serving the needs of the athletes. She goes onto to say that Nike UNDERSTANDS the consumer (They don’t concentrate on the competition). Their job is to solve problems for the consumer/ the athlete.

3 keys to a great season

In a Podcast  [11] featuring Jon Gordon  [12], the author of “The Energy Bus”. Jon is an American author and speaker on the topics of leadership, culture, sales, and teamwork.  In the Podcast, he talks about 3 keys to a great season for an NFL player. These are not only applicable to an athlete but to Nike, other companies and entrepreneurs:

In the Podcast he talks about the ‘inside out approach’ (The Inside-Out approach is guided by the belief that the inner strengths and capabilities of the organisation will make the organisation prevail.). I think this is very relevant to the way that Phil Knight ran Nike by continuously focussing on their strengths.

Jon is a very big supporter of culture and mentions how culture impacts companies. He says that businesses need to “focus on culture” as “culture drives behaviour”.

I will end with a few good quotes.

“The way to stay ahead was through product innovation. We happened to be great at it.” – Phil Knight

“We wanted Nike to be the world’s best sports and fitness company. Once you say that, you have a focus. You don’t end up making wing tips or sponsoring the next Rolling Stones world tour.” “Play by the rules, but be ferocious.” – Phil Knight

[2] Jon Gordon is an American author and speaker on the topics of leadership, culture, sales, and teamwork.